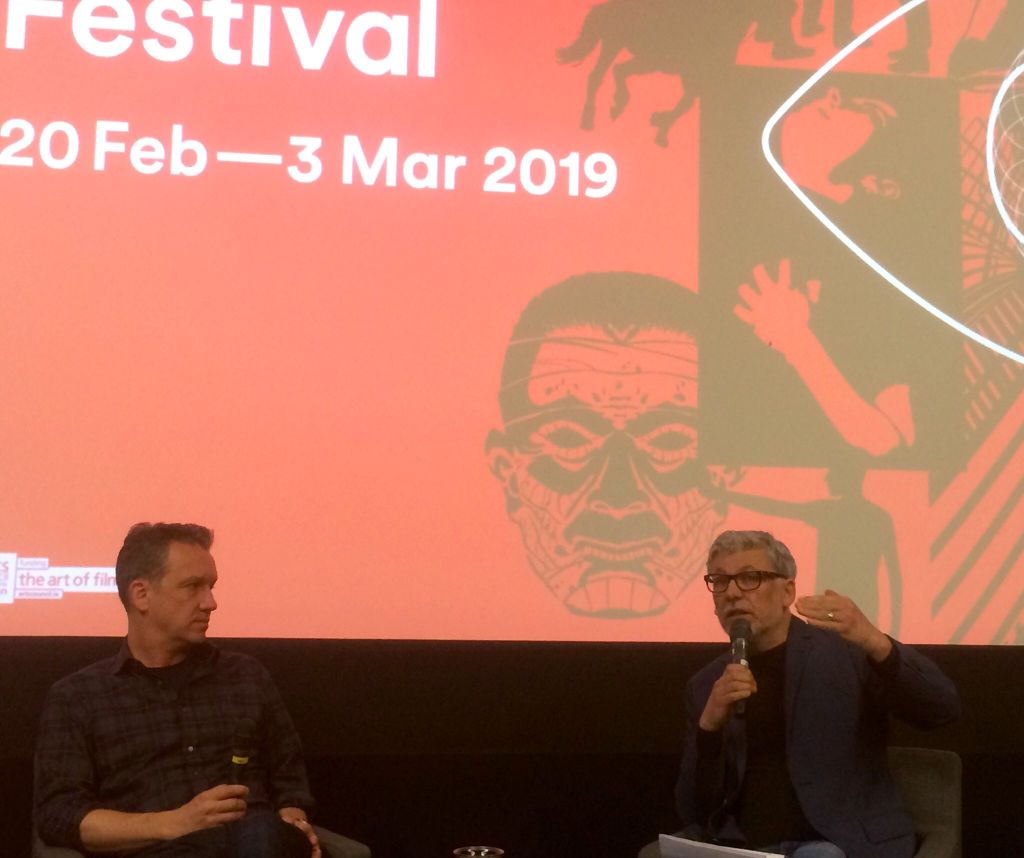 Thanks to the amazing work of all those involved in the Virgin Media Dublin International Film Festival and Trish Long from Disney Ireland, we were lucky to be graced with the incredibly modest Sean Bailey, president of productions at Walt Disney Studios in The Lighthouse Cinema on Wednesday 20th.  This was hosted by our very own Paddy Breathnach director of ‘Viva’ and ‘I Went Down’. I was also lucky enough to slip out of the office to attend.

You might think that Sean grew up around film considering how well he’s established himself in the industry, you would of course be wrong, well I was anyway. Seans father was a professor at the very well known Caltech in California, who always enjoyed the idea of combining concepts that had possibly never been combined before. This is one thing that Sean believes he’s carried on to his current work. What’s most interesting are Seans early influences in film. To be the president of production at Disney one might expect their film influences to be in keeping with a family thematic, however, Sean cites his early influences to be the works of Alfred Hitchcock with Psycho at the forefront. He did admit to watching it at far too young an age and may or may not be scarred from it ever since. Stanley Kubricks ‘The Shinning’ is another that made a strong impression on him growing up along with various Stephen Kings books. All of which seem to be the entire opposite of what one associates with the Disney brand.

Sean admittedly stated that he was an alternative pick for the job in Disney as Paddy asked if he was an expected choice or not. Sean stated that Bob Iger (CEO of The Walt Disney Company) wanted to change Disney in the ways it functioned and the people it worked with and Sean was part of what Bob envisioned. Sean hasn’t disappointed either with the large selection of live-action films that have been screened and especially the ones lined up for this year. I had seen the trailers for some of Disney’s films being released this year such as Dumbo, Artemis Fowl and The Lion King yet seeing them on the big screen in the Lighthouse only fueled my excitement and I may have momentarily became a 9 year old all over again. These films are entirely new in how they are shot and edited yet they still pay homage to their originals in the best way possible. Sean shared how when the team at Disney were discussing films they could possibly remake; they thought some were almost too special to touch. Mary Poppins being one of them, however when an incredible script comes along that can change entirely and that it did.

Sean briefly took us through some of the upcoming film releases such as Aladdin where he was delighted to say that the new film plays with the fact that the audience know the film. The audience know the characters and know the songs. The film at parts plays with what the audience is expecting to hear and see, it’s a clever move on their part no doubt. He did also mention that there is work being done on a potential Tron 3 with the involvement of Jerred Letto, yet we’ll have to wait and see.

I easily could have sat there all day listening to Sean discussing his various works and thought processes with Paddy asking all the right questions. One point that Sean made with regards to ‘making it’ in the industry was that the harder you work, the more likely you are to get in the way of luck. Other advice he shared was to just get out and get things made, rather than sitting around discussing things and holding out, just go do it. Even if the work isn’t great, you’ll have learnt a huge amount and it yields relationships, you’ll meet people that you’ll collaborate with in the future so always be conscious of the people you meet.

A huge thank you to Virgin Media Dublin International Film Festival for bringing Sean over to the festival. Paddy Breathnach deserves great thanks also for his fabulous hosting skills and thanks to The Lighthouse Cinema for hosting various talks/screenings throughout the festival.

If you haven’t already, check out the festivals programme on their website https://www.diff.ie/ and I’d advise booking soon as things are selling out quickly.