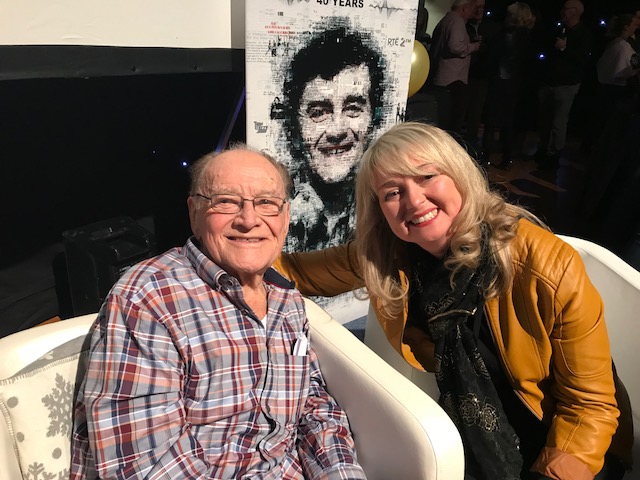 Yesterday afternoon in the RTE Radio Centre, the legend that is Larry Gogan celebrated 40 years on radio.  I had the privilege of being part of that assembled group to wish Larry well as he moves from 2FM to RTE Gold later this month.   Lovely tributes were paid from U2’s Larry Mullen Jr who wrote ‘We are alike in some ways: never that comfortable in the spotlight, but spending our careers there.  It’s never too late to thank you, or to recognise your part in our early success story, and that of so many others”.

Bob Geldof ‘knighted’ Larry live on air during his final broadcast and thanked ‘Sir Larry’ for everything he did for his band and for bringing proper rock ‘n’ roll to the country.   In 1979, Larry played ‘Clockwork’ by The Boomtown Rats as the very first song on Radio 2 (as it was called then), and in 2019, 2FM was renamed Larry Gogan FM for the day, with Ryan Tubridy, Graham Norton, Brendan O’Carroll, Imelda May and Roddy Doyle among those calling to pay tribute, joined by John Bon Jovi, Cliff Richard, Westlife, Rod Steward, Chic’s Nial Rogers, Hozier, Dermot O’Leary and Sigrid who sent recorded messages of best wishes.

I was lucky enough to spent my earlier career in Radio and travelled the length and breath of Ireland in the 2FM Roadcaster as a Broadcasting Assistant, with Larry and the other 2FM DJ’s of that time and it holds such fond memories of the musicians and artists who came along to play live or to have a chat (Photos of Christy Henessey and The Saw Doctors playing outside the Roadcaster) and of course the public who provided no end of entertainment with their unique answers to the ‘Just a Minute Quiz”.

I feel honoured to have been a small part of the 40 years that Larry celebrated last night and it was so lovely to catch up with many of my fellow 2FM colleagues of that time and exchange laughter and stories.  Larry is not only a legend of the music industry but a true professional and wonderful person who is loved and respected by all who know him and I am no exception.  I wish him all the best and many more happy radio years as he continues to ‘spin the discs’ on the lunchtime slot for RTE Gold.